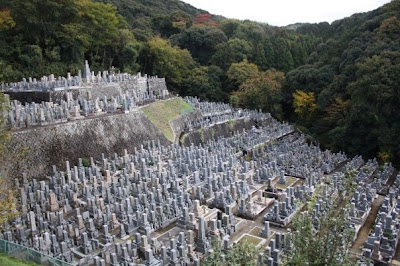 Across from a noodle shop in a Yokohama suburb, Hisayoshi Teramura's inn looks much like any other small lodging that dots the port city. Occasionally, it's even mistaken for a love hotel by couples hankering for some time beneath the sheets. But Teramura's place is neither a love nest nor a pit stop for tired travellers. The white and grey tiled building is a corpse hotel, its 18 deceased guests tucked up in refrigerated coffins.

Death is a rare booming market in stagnant Japan and Teramura's new venture is just one example of how businessmen are trying to tap it.

In 2010, according to government records, 1.2 million people passed away, giving the country and annual death rate of 0.95 per cent versus 0.84 per cent in the United States, which is also the global average.

The rate of deaths is on the increase. Last year, there were an extra 55,000 dead and over the past decade, an average of 23,000 more people have died each year in Japan.

Annual deaths are expected to peak at 1.66 million in 2040 as the bulk of the nation's baby boomer generation expires. By then, Japan's population will have shrunk by around 20 million people, an unprecedented die off for a nation neither at war or blighted by famine.

"There's been a rush into the market," says Teramura, who founded cemetery developer company Nichiryoku (7578.OS) 45 years ago. Even Japan's second biggest retail chain, Aeon (8267.T), rail companies and the nation's biggest farmers association, Japan Agriculture are getting into the business, he notes.

Joining Teramura in the funeral rush are a slew of new entrants, some of them refugees from a shrinking wedding industry.

Entry to the industry is easy. There are no licenses or mandatory qualifications. All any wannabe funeral director needs is an office and a telephone. Flowers or coffins are easy to order and ceremonial halls, hearses and monks are all for hire.

In the United States, by comparison, most funeral entrepreneurs need to study for three years, including a stint as an apprentice before regulators consider handing out a licence.

In a recent poll of 2,796 funeral industry related firms, Japan's Ministry of Economy Trade and Industry METI.L found that a third have been in business for a decade or less.

It's becoming a wild west market in some ways, attracting the honest operators and the not so reputable too.